Satellites may have underestimated the warming in the lower atmosphere 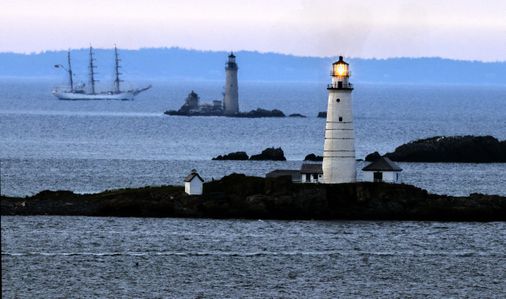 As the sea rises, the Boston Harbor Islands are among the nation’s most endangered historic sites

New research by scientists at LLNL shows that satellite measurements of the temperature of the troposphere (the lowest region of the atmosphere) may have underestimated global warming over the past 40 years. One of the physical processes they looked at was tropical water vapor, as this NASA image shows.

New search by Lawrence Livermore National Laboratory (LLNL) climatologists and collaborators show that satellite measurements of the temperature of the troposphere (the lowest region of the atmosphere) may have underestimated global warming over the past 40 years.

The search appears in the Climate Journal.

The team studied four different properties of tropical climate change. Each property is a relationship between the trends of two “complementary” variables. Complementary variables – such as tropical temperature and humidity – should show correlated behavior. This correlated behavior is governed by well understood basic physical processes.

The first three properties examined by the team involved relationships between tropical temperature and tropical water vapor (WV). MV trends were compared to trends in sea surface temperature (SST), lower troposphere temperature (TLT), and middle-to-upper troposphere temperature (TMT). The fourth property was the relationship between the TMT and SST trends. All four ratios are tightly limited in climate model simulations, despite the differences between models of climate sensitivity, external forcings, and natural variability. In contrast, each report has a wide range when calculated with observations. The model trend ratios between MV and temperature were closest to the ratios observed when the latter are calculated with datasets showing greater tropical warming of the ocean surface and troposphere.

For the TMT / SST ratio, the consistency of the model data depended on the combination of observations used to estimate the TMT and SST trends. Observational datasets with greater warming of the tropical ocean surface gave TMT / SST ratios that were in better agreement with the model results.

“Such comparisons between complementary measures can shed light on the credibility of different data sets,” said Stephen Po-Chedley of LLNL, who contributed to this study. “This work shows that a careful comparison of different geophysical fields can help us determine historical changes in climate with greater precision.”

While the climate model predictions of these tropical temperature-humidity relationships are realistic, the results reflect either a weak systematic bias in the tropospheric temperature trends via satellite, or an overestimation of the observed atmospheric humidification signal.

“It is currently difficult to determine which interpretation is more credible,” said Ben Santer, LLNL climate scientist and lead author of the article. “But our analysis reveals that several observational datasets – especially those with the smallest values ​​of ocean surface warming and tropospheric warming – appear to be at odds with other complementary variables measured independently.

Other Livermore scientists include Jeffrey Painter and Mark Zelinka. The LLNL team collaborated with Carl Mears and Frank Wentz of Remote Sensing Systems, John Fyfe and Nathan Gillett of the Canadian Center for Modeling and Analysis of Climate, Environment and Climate Change, Qiang Fu of the University of Washington, Susan Solomon of the Massachusetts Institute of Technology, Andrea Steiner of the University of Graz, Austria, and Cheng-Zhi Zou of the National Environmental Satellite, Data and Information Service of the National Oceanic Administration and of the atmosphere. Work at LLNL has been funded by the Regional and Global Model Analysis Program area of ​​the Department of Energy, Division of Earth Systems and Environmental Sciences, and by several grants from the LDRD.

/ Public publication. This material is from the original organization and may be ad hoc in nature, edited for clarity, style and length. View full here.

PICTURE: The variability of ocean currents is influenced by multiple factors. view After Credit: Prof …